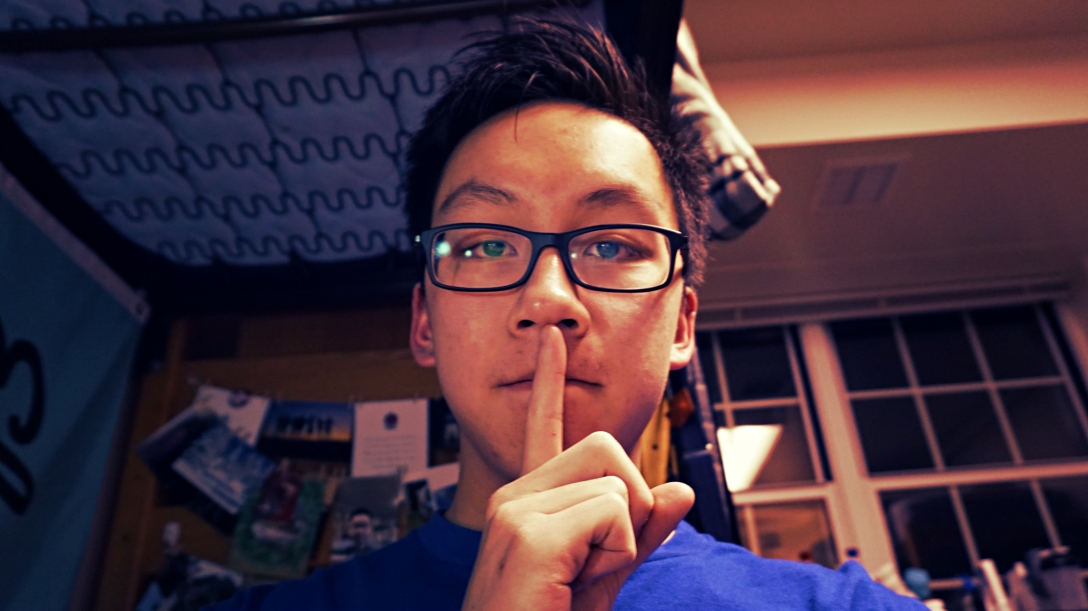 Divided in today’s nearly black-and-white world where the society around me forces me to pick sides. On racial issues. In political debates. On everything. And when I can’t quite make up my mind, I end up staying silent: a mute watching from the sidelines.

When I keep my mouth shut, I can do nothing but watch. When I don’t pick a side, some people assume that I’m on the opposing team.

As a yellow man, there isn’t a moral high ground to take. My ancestors have had their fair share of hardships. From the Chinese Exclusion Act to the Japanese Internment Camps, we Asian-Americans know what it’s like to suffer; my father’s rags to riches story only attests to that. In my homeland, China, millions of people are still working under slave-like conditions, wasting away as cheap labor to make products for developed countries like the United States. Even today, Asian-Americans are looked down upon while still having the highest standards set to achieve.

As a yellow man, there’s no moral low ground to take.

Asian-Americans have the highest median income in the United States. According to average ACT scores, Asian Americans are the most successful academically. We know what it’s like to flourish and prosper. Even though we’re a small group population wise, we’re not considered an underrepresented minority by many colleges. As exemplified by my father alongside well-known and successful Asian-Americans such as George Takei and Amy Tan, it’s difficult to use our past as a scapegoat when things go haywire — they’ve all lived out the American Dream with all odds stacked against them.

In the United States, the “full” Asian-Americans make up about 5.8% of the population. That number goes up when incorporating people from mixed heritage. Yet as small in numbers as we might come in, we stick out like a sore thumb. Those funny hats we wear, the loud conversations and incomprehensible chatter — we’re pretty hard to miss.

Even as obvious and/or obnoxious as our existence might be to some, Asian-Americans are almost universally excluded in today’s political and social discussions. Even in neutral things such as statistics or sports, Asians are either the topic of heated racial discussion or categorized in the “other” section — it’s all or nothing.

I refuse to take sides.

Doing so only widens the gap that the United States is so close to falling into. A gap that is filled with hatred and despair, things that take this country in no direction but backward. However, at the same time, I don’t want to stay quiet. I want to yell and chant just as much as everybody else does, but I inevitably keep my mouth shut as I fear the surefire backlash that always follows.

In many Southeastern Asian countries, citizens live with a collectivist mentality: the whole is only as good as the sum of its parts, we work for the greater good of the country. We’re willing to give up some of our rights in order to benefit everyone. Asian-Americans believe that hard work pays off and through that alone can we achieve happiness and success.

However, that also means that we’re less prone to speaking up and creating conflict, something that Asian-Americans actively avoid in order to keep the peace in the community. We’d rather take a blow than fight back, which is why events such as the shooting of Korean artist Michael Cho didn’t receive nearly as much coverage as it deserved.

In countries of the western world like the U.S., citizens live with an individualistic mentality: we are our own man, our own person and can live our own lives. Like the capitalist economy we Americans live in, we work best when engaged in fierce competition which then pushes us to strive for new highs and records.

However, that also means that there’s a constant state of tension between everyone. There’s always a sense of animosity and discord that hangs around the air wherever you go. Whether it’s a bustling financial district or a college classroom, there’s bound to be an enemy.

In their absolute forms, the Southeastern Asian collectivist mentality and the American individualistic mentality are complete opposites, which creates tension between these two cultures. Communism. Democracy. Buddhism. Catholicism. Each finds the other unbelievably frustrating.

The majority of social change is determined by the actions of government officials. Governors, state representatives, senators — they are the ultimate deciding force when it comes down to the logistics. These policymakers decide the path the United States will take as a whole; it is up to democracy to pave it.

But, for the time being, what do I do? If there’s no conversation for me to participate in, how will my voice be heard? I don’t want to wait every two or four years for an election just to get drowned out by the masses.